When is Microsoft going to fix (insert your favorite bug or misfeature of Schedule+ here)? When will a new upgrade be made available?

Schedule+ will never be upgraded past v7.5 (although ...). Instead, Microsoft has released Office 1997, which replaces both Schedule+ and the Windows95 mail-client, variously called Exchange (confusingly enough, as it's not the same as either Exchange Server or the client that comes with it) or Windows Messaging, with a single integrated product called Outlook97. This has fixed many problems with Schedule+, introduced new problems, and ignored a few of our favorite old problems as well.
In the last few years new versions of Outlook were introduced (i.e. Outlook98, -2000, -XP (= -2002) and Outlook2003).
For more information about (not) moving to Outlook, you might have a look at the articles listed under 'Schedule+, Exchange Cient and Outlook - interoperability'.

In English-US, version 7.0 comes standard with MS Office95, can be installed using the "Custom" installation-mode, and will appear by default in your system as:

Both versions 7.0a and 7.0b are only bugfix upgrades that enhance compatibility with certain devices such as external PDAs, and correct some improper behavior of OLE. (Version 7.0 does not actually do what its help claims it does with OLE, so following the examples of OLE that Microsoft provides will not work.)

Version 7.0a (English-US) used to be only available to anyone who installed the v.4.0-version of MS Exchange Client. However, some time ago (1999/2000) it was available on the 'WindowsCE Services 2.2' CD-ROM, that accompanied some handheld-PC's.
This software can be downloaded from Microsoft's (Public) FTP-site, since the client-part of 'Service Pack 2' of MS Exchange Server v.4.0 contains a complete setup for Schedule+ v.7.0a. In this directory are several files, each for the various Operating Systems (DOS, Windows3.x, Windows9x and (various) WindowsNT's). Make sure to get the correct version for your OS.

The SP2S40??.EXE-files are only there if you want to 'debug' the program.
All these files can be opened with WinZip to view (and extract) the contents.

In the Netherlands and Belgium v.7.0a is the Schedule+-version on the MS Office95 CD-ROM in Dutch. I don't know about other languages/countries, but it might be worthwhile to check.
Should you not find Schedule+ v.7.0a on your MS Office95 CD-ROM, then have a look at the FTP-site of Microsoft. Each directory stands for a language. Select the one you need, browse to the 'Exchg4.0/Sp2/Client/'-directory and select the file you need (see table above for the exact name).

Version 7.0b is supposedly available for the cost of shipping; call 1-800-360-7561 (the Microsoft order desk) and try to order part number 061-00003. However, Microsoft has been slow to ship (six weeks wait is typical) and it's not entirely clear that it's available at all (rumor has it, that it isn't, and Microsoft won't commit to its status).
There don't seem to be 'upgrade packs' for Schedule+ to change v.7.0 to v.7.0a or v.7.0b. If you need the 7.0a-, or 7.0b-version for synchronisation with your specific organizer (esp. SHARP), you may benefit from the Import/Export Add-On Pack.

There have been roumors about v.7.0c and/or d. Especially some PDA support-websites explained that such a version would be necessary to synchronize with Schedule+.
However, nobody ever seems to have laid eyes on either of them.

Schedule+ v.7.5
Version 7.5 (build 1457.3) came originaly with the v.5.0-release of MS Exchange Server and despite the number, isn't much of a change. The main difference seems to be, the integration of the Internet-wizard (which is separately available for Schedule+ v.7.0).

If you want to install Schedule+ 'by hand' without invoking the MS Office installation-program, you can find the necessary files in the following directories:

You can find a description of which files to copy, further down this page.

Both versions, v.7.0 and v.7.5, seem able to share the same data, settings, etc., and co-exist on the same system together.

Schedule+ v.7.5 (build 1457.3) turns out to still be available on the MS Office2000 CD-ROM. It's in the 'CD:\Pfiles\Msoffice\Office\1033'-directory, or in one of the neighbouring directories. The exact position seems to be dependent on the language of your Office2000 CD-ROM. For instance, on the Dutch CD the files are in the "\1043"-directory. (See below for a list of country-codes.)
According to MS, the files should get copied to your harddisk during setup to the ".\Program Files\Microsoft Office\Office\1033"-directory, from where you should be able to run the program. On my PC, not all files were copied and those that were, turned up in ".\1043". So, you may have to fiddle around a bit.

If you want to install the program "by hand":
Most of the Schedule+-files seem to be available on the CD, yet in the directory are several other files, unrelated to Schedule+. The ones you actually need to make the program run, are

but may be necessary for some functions (such as printing or synchronising with the PostOffice) to work. All necessary Registry-settings should be made by the program, when it's started for the first time. (Although I haven't tested this.)
I've seen several reports of people who got Schedule+ running in this way.
The "Help"-file appears to be missing from the CD-ROM, but it can be downloaded from the 'Important / usefull files'-section on this site.
Most of the "Import / Export"-filters (Ilx????.fil and Ilxlate.*) seem to be missing, just like the "icons" (*.ico). The import of Schedule+ v.1.0 ".CAL"-files seems to be disabled, as the "Mscal32.dll" is not available; only Schedule+ v.7.x '.SCD'-files can be used via "Msscd32.dll".
If you want to add a specific sound-file ('.WAV') to the reminders pop-up window of Schedule+, you can get a usefull file here.

When I say 'all files', I mean all those files that are mentioned above, where I describe the setup of the program 'by hand'. Yet, on the OfficeXP CD-ROM some files are available that are not on the Office-97 and -2000 CD's: the import of Schedule+-data from Schedule+ v.1.0 '.CAL'-files is now possible again. Simply extract the 'MSCAL*.*'-files to your Schedule+-directory.

MS OfficeXP now uses a 'new' method to store its files on CD: all files are in one big 120MB '.CAB'-file (a sort of '.ZIP'-file that was invented by MS a few years ago). On most recent Windows-versions you can open the '.CAB'-file by double-clicking it, and extract any files it contains by selecting them, right-clicking and selecting [Exctract]. In the window that now opens, point to the directory where you want the files to end up.

The Setup-program of MS OfficeXP shows Schedule+ as one of the components of Outlook, if you select the 'Custom' setup and 'Choose detailed installation options for each application'.
If you mark all programs and components as 'Not Available' and use the [+]-sign to expand the 'Microsoft Outlook for Windows'-option, you can mark 'Schedule Plus' to 'Run from My Computer'. This automatically selects 2 other options for installation: 'Help' and 'Outlook Messaging Components', which cannot be marked 'Not Available'. You can, however, mark them as 'Installed on First Use' (which is actually not advisable). This selection should only install Schedule+, yet the setup-program points out that 59 MB of disk-space is necessarry for this installation. Apparently a lot more is installed if you use this procedure.
In a default OfficeXP-setup, Schedule+ is marked to be 'Installed on First Use'. I don't know when this 'first use' would be, if the program is not installed in the first place.

In the [File] [Import]- and [File] [Export]-menus, the option is still/again called 'Schedule+ Interchange', instead of 'Outlook Interchange' like in v.8.0 from Office2000. Probably the TimeZone-issues are resolved in this version.

The resulting files have a wrong extension, for instance '.FMT_1033'. However, simply renaming them is enough, for example rename 'MSSPC32.DLL_1033' to 'MSSPC32.DLL'.
The default directory where the Schedule+-files are installed by the Setup-program of MS Office, is 'C:\Program Files\Microsoft Office\OFFICE11\1033'. Although the last directory may be different if your Office is a non-English version:


MS Office 2007 -- NEW!!!
I have not been able to find the installation files for Schedule+ on either the MS Office 2007, nor the MS Outlook 2007 CD's/DVD's.
The only reference to Schedule+ seems to be in the Advanced setup (i.e 'Customize'-option in the setup-tool). 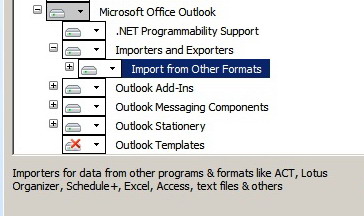 Here Schedule+ is listed as one of the 'other' programs from which you can import the data in Outlook, vs. the 'popular e-mail programs, personal information managers and standard file formats'.
Apparently MS Office 2003 was the last version that contained Schedule+.

This file (in English-US) can be downloaded from the FTP-site of Microsoft.

Should you want to upgrade a French-, German- or Korean-version of Schedule+ v.7.5, then have a look at the FTP-site of Microsoft. Each directory stands for a language. Select the one you need, browse to the 'Exchg5.0/Sp2/Client/'-directory and select the file you need (see table above for the exact name).

Remark: As one might expect, there also was an SP1 for Exchange Server 5.0. Which was translated to many different languages: until now I've come across Arabic, Chinese, Danish, Dutch, Finish, Greek, Hungarian, Italian, Norwegian, Polish, Portugese (Iberian-; not Brazilian-), Russian, Spanish, Swedish and Turkish [alfabetical order].
However, (the 'client-part' of) SP1 doesn't upgrade Schedule+; only Exchange Client benefits.

SP2 is quite useful in several European-countries and in Australia, since it fixes some problems with 'daylight savings time'-settings.
After SP1 there has been an unsupported fix in Danish, for this problem, which changes the version-number to 7.5.1460.???
SP2 upgrades Schedule+ v.7.5 to version-number 7.5.1460.8.

The 'Daylight Savings Time'-issues mentioned above, along with a minor Y2K-bug, are repaired in the 'Millennium-fixes' for Schedule+. Yet, these fixes have only been distributed in the English (US)-version. No translations seem to be available.
(Building translated versions seems out of the question, as MS TechSupport told me. They have moved to a different procedure for programming their software.)

Some time ago another version turned up: the MS Outlook2000 CD-ROM (and some of the MS Office2000 CD's; I haven't been able to pinpoint exactly which versions) contains in its' '\1033'-directory an 'Msscd32.dll' that reports a version-number of '8.0 8.02.2537.0000'. So far, I've checked the English-US and German CD, and both had this version.
The same version of this file is available on the 'MS ActiveSync v.3.1' CD-ROM that accompanies some PocketPC's.

When you installed Schedule+ in the way I described above, the program calls itself 'Microsoft Outlook Calender' instead of 'Microsoft Schedule+' in the blue bar at the top of the Window. Also, the icon in the upper-left corner is different.
In the [File] [Export]- and [File] [Import]-menu's is an option available called 'Outlook Calender Interchange', instead of the 'Schedule+ Interchange' in the normal v.7.5. It seems like the functionality of 'Msoutl.dll' is incorporated in this version of 'Msscd32.dll' (although I haven't really tested this; the changes might be purely cosmetic).
So, although the version-number suggests otherwise, no major differences ... again. As described above, in later versions of MS Office and MS Outlook, Microsoft seems to have reverted to v.7.5. Apparently this v.8 seems to have been a temporary one.

Is there a Macintosh version that works with the PC version?

How can I make versions 1.x and 7.x work together on the same network?

The short answer: you can't, reliably. Try to migrate everyone at once.

The long answer: 7.0 users can read but not modify the schedules of 1.0 users.  1.0 users can't read or write to the schedules of 7.0 users, though they can see the free and busy times in their Planner. And even that won't work quite right when someone delegates to another person with a different version that they should receive appointment requests. And to make matters worse, depending on what versions of what e-mail clients everyone is using, sometimes none of this works when people invite one another to meetings across versions (the Accept and Decline buttons, for instance, appear or act incorrectly). There is, unfortunately, no good solution to this problem other than migrating everyone as close together as possible.
For an even more elaborate discussion on interoperating various Schedule+ (and Outlook) -versions, you can jump to the Interoperability-section of this FAQ.

Can I import data from some other calendaring program (or Organizer)?